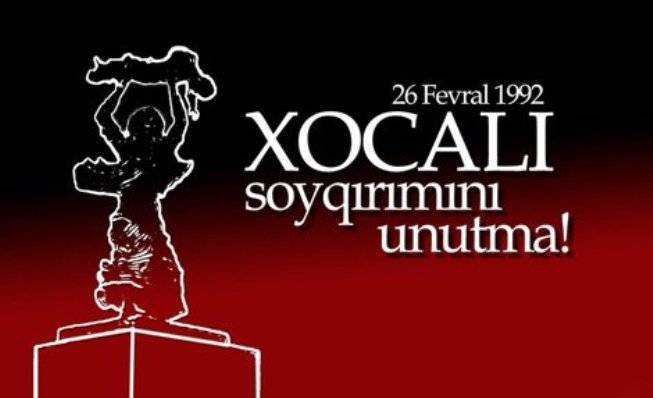 Today is the day of sorrow for all Azerbaijanis – the anniversary of the genocide committed by the Armenian armed groups in Khojaly, town in Azerbaijan’s Nagorno-Karabakh region.

Over the night from 25 to 26 February 1992 Armenian armed forces with support of the infantry guards regiment No.366 of the former Soviet Union committed genocides in the town of Khojaly.In one night, 613 persons were killed atrociously, including 106 women, 63 children and 70 elderly people. They scalped, cut people’s head and other organs off, extracted eyes of children, chopped stomachs of pregnant women.

A part of town residents, attempted to flee, were killed by Armenians, waiting in the ambushes. According to the Russian remedial centre “Мемоrial”, 200 corpses had been brought from Khojaly to Aghdam for 4 days, tens of humiliation facts has been discovered on them. 181 corpses (130 men and 51 women) were made forensic medical examination in Aghdam. According to the examination 151 persons dead in result of bullet wound, 20 – missile wound, 10 people were killed with blunt instrument. Remedial centre discovered fact of scalping of alive man.

Khojaly genocide is one of the most terrible tragedies of the twentieth century. The Azerbaijani people will never forget the events of that night and will always honor the victims.We believe that the blood of our martyrs will be avenged!

May God rest all Martyrs!

Artistic gymnastics competitions have been held in the 7th “Zirve Games”