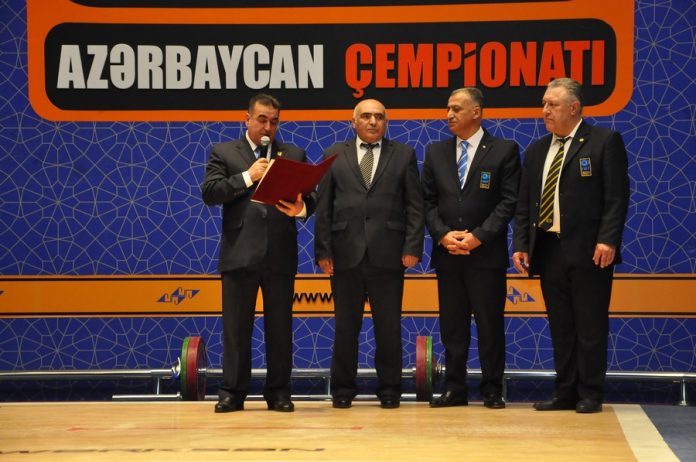 On February 21-22, an opening ceremony of Azerbaijan Weightlifting Championship among males and females took place in the competition hall of Shuvelan Weightlifting Academy. Speeches were sounded.

Fakhraddin Ismayilov, Senior Officer of the Ministry of Youth and Sports of Azerbaijan, addressed the ceremony. He spoke on the enhancement of weightlifting in our country and expressed his confidence in further success. He also emphasized the growth of women weightlifting in Azerbaijan. Ismayilov congratulated all the contestants on the opening of the new season and wished them success.

Rizvan Rasulov, general secretary of Azerbaijan Weightlifting Federation, took a floor as well. He stated that our athletes were successful in 2019 and will continue this line in the Olympic year and in the subsequent years.

Officially, the competition was declared open and the National Anthem of Azerbaijan Republic was sounded.

In the course of ceremony, the jubilee of Azad Mustafayev, an experienced specialist, USSR sports master, honored coach, international referee, Honorary Physical Education and Sports worker of the Republic of Azerbaijan, was highlighted. A special congratulatory letter from Azad Rahimov, Minister of Youth and Sports, was read, and he was wished luck and successes in his life, and his services throughout his career were appreciated. Mustafayev was also bestowed with the present of the Azerbaijan Weightlifting Federation.