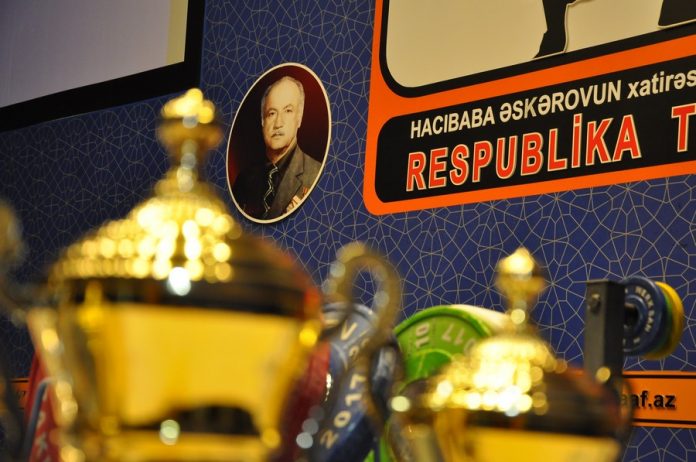 On December 28, the 3rd Republican Traditional Tournament devoted to Honored coach of Azerbaijan, international referee-Hajibaba Askerov’s memory took place in the competition hall of AAAF Park Residential Complex. The competition, which was accompanied by a high level of organization, was of great interest, so the audience witnessed the intense struggle for medals on the platform.

In the competition of individual character, men and women weightlifters, as well as masters participated, winners were determined according to the Sinclair schedule. The champions and prize-winners were awarded with medals, diplomas and souvenirs.

At the opening ceremony of tournament, first, the General Secretary of AZE WF took a floor. He expressed his satisfaction with the next competition:  “It has already been a good tradition. We celebrate Hajibaba Askerov’s memory for the third year in the competition hall. We, as AZE WF, will go on to support the organization of tournament. I welcome all, “Let the strong win”, and wish success to the participants. ”

Gulara Narimanova, daughter of Hajibaba Askerov, also thanked the organizers of the competition:” Hajibaba Askerov was a lover of weightlifting and devoted his life to the development of this sport. To honor his memory with such a prestigious competition is the result of respect to him and to generally weightlifting. I congratulate all of you on the forthcoming New Year and the World Azerbaijanis Solidarity Day and wish new and greater success in the new year”.

Then, on behalf of AZE WF, the daughter of Hajibaba Askerov was presented with a commemorative plaque and a medal.

The aim of the tournament is to promote Hajibaba Askerov’s life and sporting activities among the growing generation of athletes and young people, to enhance weightlifting and to increase the athletes’ level of mastery.

In last round competitions about 600 athletes tested their powers

The 7th Zirve Children’s Games will be held!