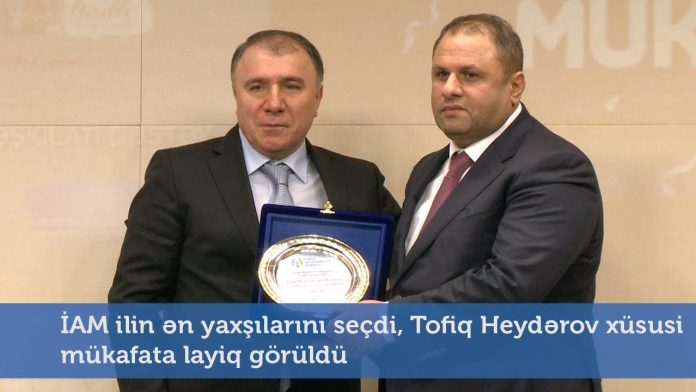 Winners of the Sports Research Center on the “Winners of the Year-2019” project were determined.  The names of the champions were proclaimed in the ceremony “7 winners” organized at the Baku Olympic Stadium. The event, which was accompanied by a high level of organization, was attended by many distinguished guests.  Deputy Minister of Youth and Sports of Azerbaijan Ismayil Ismayilov, vice-president of the Azerbaijan Volleyball Federation, outstanding specialist Faig Garayev, poet and writer, former deputy Agil Abbas, head of Baku Youth and Sports Administration Ragif Abbasov, shooter Zemfira Meftahaddinova and judoka Elkhan Mammadov, well-known football experts Vagif Sadigov, Iskander Javadov, Gurban Gurbanov and many others were also amid them. The ceremony, which caused great interest, was in the spotlight of the media.

The work carried out by Tofig Heydarov, president of “Zirve” International Sport Clubs in 2019, was also highly appreciated and distinguished with a special prize.  The competitions of the 7th “Zirve International Children’s Games” dedicated to the 96th anniversary of National leader Heydar Aliyev held at the AAAF Park Residence, Sports, Recreation and Entertainment Complex on May 5-28, 2019, in Khirdalan and Astara cities, were remembered with its grandeur that more than 4000 athletes from 12 states representing over 300 clubs tested their powers. It was emphasized that these Games, organized as a small Olympics and turned into a major sporting event, led to many firsts in Azerbaijan, and played a role model, leaving huge traces behind it for the future.

Taking into account all these, as a result of a survey by the Sports Research Center, Tofig Heydarov, the President of the “Zirve” International Sport Clubs, was rewarded with the special prize “For his support to the development of children’s sports”. He was presented this prize by Iskander Javadov,who is a former football player, veteran specialist. In his speech, Tofig Heydarov said: “It was a great pleasure for me that sports journalists see me as worthy of this award. The media plays a great role in our business development. They work as much as we do, and do their best. I am thankful to them. As for the prize itself, Azerbaijan is a sporting country, and for keep it going, child sports should be constantly developed and a great deal of effort is needed. This year we have already organized the 7th Zirve Games. These competitions, organized in 7 sport types according to custom, this time were held in 7 kinds of sports and reached to international level. I’m glad that the Games were good and made their contribution to the country’s sport.

Starting next year, we will try to hold these competitions on a larger scale and more spectacularly, and support the development of the region organizing them in Astara. ”

Tofig Heydarov is the President of the “Zirve”,  International Sport Clubs, one of the locomotives of Azerbaijan sports.  Thanks to her initiative and support, halls and complexes are being built in various regions of the country, and thousands of young and junior athletes gain opportunities, chances to conquer the tops in the future. Tofig Heydarov is one of the most vital figures of Azerbaijan sports, and the rewards are a proof of this.

The next anti-doping seminar was held!