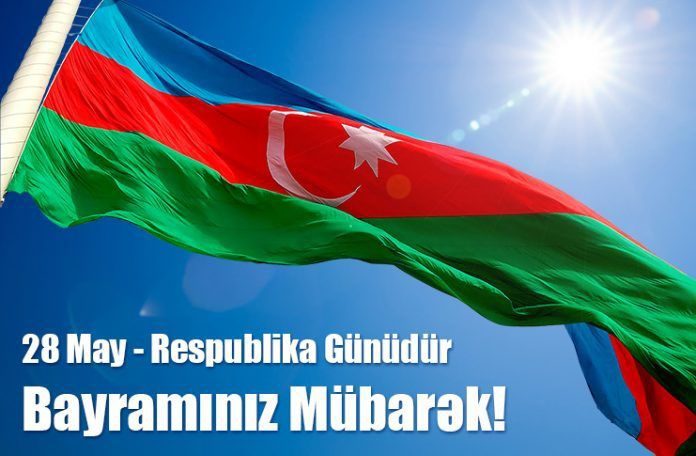 Today – 28 May is the 101th anniversary of one of the brightest moments in the history of Azerbaijan – the foundation of Azerbaijani Democratic Republic. Azerbaijan became the first democratic parliamentary republic in the Muslim world. This holiday was not celebrated during Soviet times, and it became a public holiday after the collapse of the USSR. Since 1918, every year the Azerbaijan nation celebrates this date with a sense of pride for its history.

The emergence of the ADR was not only an event of utmost importance to the Orient-that was also the salvation of the nation. The revolution of 1917 buried the Russian Empire and the nations that had been incorporated in it became free. The ADR restored the national statehood to the people and that was its historic mission. The republic established a parliament, a government , and an army, choose its flag, national anthem, the money and even the postal stamps in a short period only, less than two years. Bilateral agreements were signed with several European states promptly that were based on mutual trust and respect of sovereignty. The Supreme Council of the Versailles recognized the independence of Azerbaijan in January 1920.

The first governmental resolution about the national tricolor flag was issued on 9 November 1918. Establishment of the government was one of the very first steps that the newborn Azerbaijan Democratic Republic took. The ADR made considerable diplomatic achievements. Many other countries had recognized the republic before the crisis in April 1920.Azerbaijan had had diplomatic relations with Georgia, Iran and Turkey.

The Socialist Fraction submitted an ultimatum at the last parliamentary session at which Mr.Rasulzade presided; they demanded to hand the power to the Bolsheviks. It was decided to yield the power to the Bolsheviks in spite of the protestations of Mr.Rasulzade and Shafi bek Rustambekov. Mr.Rasulzade said that: the history repeats itself. Our Azerbaijan is independent again and nobody can use force to take our sovereignty from us and encroach upon our proud flag. The nation celebrates the Republic Day as the most precious holiday on the 28th of May every day.
In 05.02.1991, the name of the Soviet Republic was changed and renamed “Azerbaijan Republic”.

Since 1990, Republic Day – day of state independence restoration is celebrated as a state holiday.

Pasha Ibrahimli at the highest step of honorary chair!