From the 5th to 28th of May, the 7th “Zirve Children’s Games”, dedicated to the 96th anniversary of National Leader Heydar Aliyev, held in the AAAF Park Residential, Recreation and Entertainment Complexes located in Khirdalan and Astara, are proceeding. In the competitions, attended by more than 4000 athletes from 12 nations in 27 sport types, the next competitors have been kickboxing players.

Approximately 100 athletes of eight bodyweight categories born in 2006-2009 joined the medal struggle in the main competition hall of the complex. The representatives of 30 clubs representing the regions of Azerbaijan and the capital competed in the tournament. Young kickboxing players demonstrated a decisive victory and tried to surpass their opponents. In the bodyweight categories of 26 kg, 28 kg, 32 kg, 37 kg, 42 kg, 47 kg and +47 kg, Elshan Aliyev, Elvin Fatalili, Nazim Verdiyev, Subhan Mammadov, Kenan Jafarli, Vugar Mammadov, Safarali Vahadov and Ruslan Gahramanov won the title of champion. All winners were awarded medals, certificates and memorial gifts. The medal ceremony was attended by the President of the Azerbaijan Kickboxing Federation, deputy Adil Aliyev and vice-president of Zirve International Sport Clubs Ruslan Khanverdiyev. 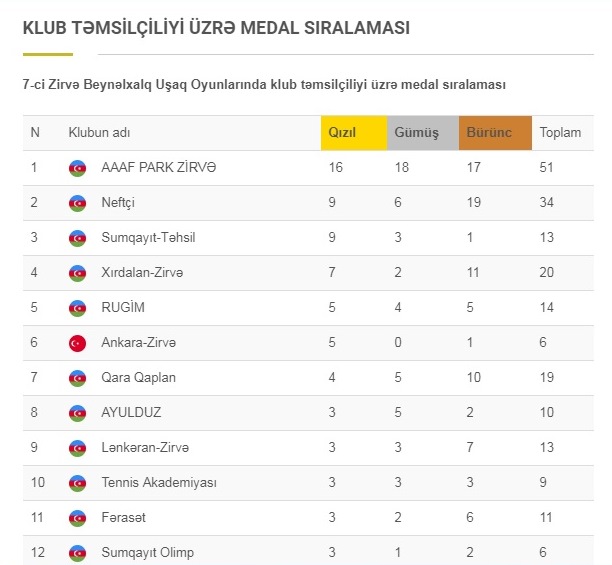 Anastasia was winner, Zeynep and Elnara became the medalists!