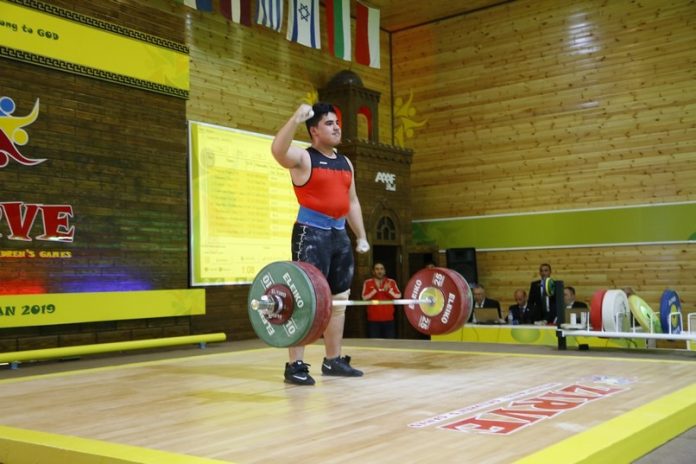 From the 5th to 28th of May, the 7th “Zirve Children’s Games”, dedicated to the 96th anniversary of National Leader Heydar Aliyev, held in the AAAF Park Residential, Recreation and Entertainment Complexes located in Khirdalan and Astara, kicked off. In the competitions, attended by more than 4000 athletes from 12 nations in 27 sport types, the winners in weightlifting have been determined. Nearly 150 athletes from 7 nations-Azerbaijan, Iran, Georgia, Turkey, Israel, Moldova and Ukraine participated in the tournament.

As expected, the competitions were very interesting. Participants, as well as spectators and guests, have witnessed an international sport festival. We can surely say that weightlifting competitions have been organized almost at the same level with European and World Championships, as well as Olympic Games. Competition and non-competition space services and the conditions created here were the excellent opportunity for the future generations to feel all the positive shades of sport, to gain experience, to get impressions and energy. All the foreign guests were unanimous in this regard. Honorable guest of the competitions Halil Mutlu, three-time Olympics, the world and European champion repeatedly, the record holder, the legendary weightlifter, head of the Turkey representation of the club, also expressed his satisfaction with what he saw and emphasized the highest organization of Zirve International Sport Clubs.

The object of the “Zirve Games” is the preservation of the heritage of genius leader, to bring his work to our future generations, at the same time, propagation and development of sport types, strengthen friendly relations between athletes and coaches, improvement of athletes’ skill levels, perfection of competition practices and evaluation of the work done by coaches.

As for the competitions, Nurgul Yuksel, Murad Hasanli, Khayyam Allahverdiyev, Amin Osmanov, Daniz Jabbarli, Ismayil Khansuvarli, Ravin Mammadov, Gasim Ismailov, Kerem Kurnaz, Aladdin Sayin and Taha Nemati managed to board the highest step of the honorary chair surpassing all their competitors. Among the winners were athletes from Turkey, Georgia, Iran, Ukraine and Azerbaijan. Representatives of the Gazakh-Zirve with 3 gold and 1 bronze medals secured the lead in the ranking of the club. The athletes of “Ankara-Zirve” settled in the second with 3 gold, while “Lankaran-Zirve” athletes, who won more medals than anyone else in terms of number, finished third with 2 gold, 2 silver and 6 bronze medals according to the criteria.

The president of “Zirve” ISC, former weightlifter, the participant of Atlanta Olympic Games 1996, international referee, businessman Tofig Heydarov also personally watched the competitions until the end. He pointed out that “Zirve Games” played the role of great start for the children, who can succeed in the championships and cup of planetary level. The club president added that these competitions are support for our state’s successful sports policy and “Zirve” is going to continue its work in this direction.

Selection competitions will be held