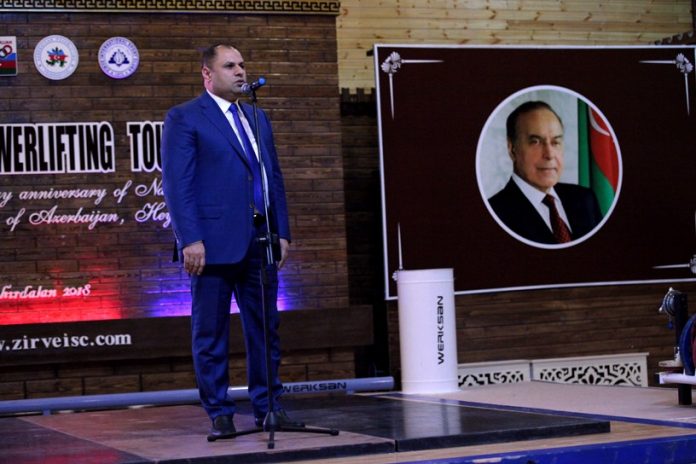 On May 28-30, international powerlifting, bench-press and deadlift tournament, dedicated to the 95th jubilee of National Leader Heydar Aliyev and 100th anniversary of Azerbaijan Democratic Republic, are being held in the competition hall of AAAF Park Residential Complex. This competition, which involved more than a hundred athletes from Iran, Russia, Turkey, Georgia and Azerbaijan, caused great interest. Many spectators in the tribunes witnessed an interesting and intense struggle.

Today, the official opening ceremony of competition was held. A large number of respected guests participated at the event. They expressed their appreciation for the development of Azerbaijan powerlifting and expressed their satisfaction with the conditions created.
First, well-known athlete, Olympic champion, head of Sport department of the Ministry of Youth and Sports Farid Mansurov took a floor. He stated that the development of sports in Azerbaijan is at the highest level: “I greet everyone. Our athletes’ victories in the international arenas led Azerbaijan to be recognized as a sports country in the world. We get great success, as well as many international competitions and tournaments are organized at the highest level in our country. The 1st European Games, IV Islamic Solidarity Games, World and European Championships, Formula 1 competitions are examples. The organization of these events is not easy, at the same time it is the confidence of the world sports community towards Azerbaijan. That is, we’ve always justified it. The competition, we are currently participating, plays an important role in the development of powerlifting. Organization is at an international level. I am sure that this tournament will become traditional and will make us proud. Once again, I wish success to the participants of this competition, saying, “Let the strongest win”.
Then the 1st vice-president of the Azerbaijan Weightlifting Federation (AZE WF), President of “Zirve” International Sport Clubs Tofig Heydarov made a speech. He stressed the importance of supporting the powerlifting sport: “Dear ladies and gentlemen! I heartily greet all in this wonderful tournament. Last year, this competition dedicated to the 95th jubilee of National Leader Heydar Aliyev and the 100th anniversary of Azerbaijan Democratic Republic was held in Nakhchivan, but is now hosted by AAAF Park Residential Complex. You know, this Complex is for weightlifters. Last year, before the Islamic Games, heads of more than 50 national weightlifting federations, as well as the president of International Weightlifting Federation, were very satisfied with what they saw here, and they said that the weightlifting center in the world should be Azerbaijan. In my opinion, this process continues at full speed, and Azerbaijan is getting become a world center in all types of sports, not just weightlifting. We express our gratitude to the President of Azerbaijan Republic Mr. Ilham Aliyev, Azerbaijan National Youth and Sports Ministry, the National Olympic Committee leadership for the conditions created and support. Powerlifting is considered to be the kind of fraternal sport with weightlifting. We, as AZE WF, are working hard that in the future, along with weightlifting, world championships of this kind of sport to be held here, regular training-camps to be organized, and the best possible conditions to be created. Work is being done in this direction and will be done afterwards. I wish success to the competition participants. Thank you very much”.

The great leader always took care of the health of our people and the development of physical education. In his various meetings and speeches, he emphasized the importance of doing business in this direction, highlighting the significance of sport in the people’s lives, and added that the development of sports is the main tasks of the state. After a decent successor of Heydar Aliyev’s heritage, President of Azerbaijan Republic Mr. Ilham Aliyev started his career as a President of the National Olympic Committee, sport and physical education in Azerbaijan began to develop rapidly. After many victories in international competitions and Olympic Games, there was a great enthusiasm among Azerbaijan youth and other athletes. Sport and physical education became a focus of attention not only of young people, but also of society. Azerbaijan powerlifters were also not out of the state care. They also felt this support, instead of sparing their power and made dignified performances in competitions outside the country. Rufat Aghayev, Azer Aliyev, Jiraf Aliyev, Bakhtiyar Guliyev, Vugar Namazov, Rustam Musayev and many other athletes have repeatedly raised our flag and performed our anthem. Once again, I greet our athletes who are with us at this prestigious event and wish them success. ”
Aladdin Aliyev officially declared the competitions open.

The National Anthem of Azerbaijan Republic was sounded.

Then the medal ceremony was held. Farid Mansurov, Tofig Heydarov and Aladdin Aliyev presented medals and diplomas to the winners. Memorable photos were taken.
Then, the competitions continued.

Tarmenkhan Babaev was first in B group