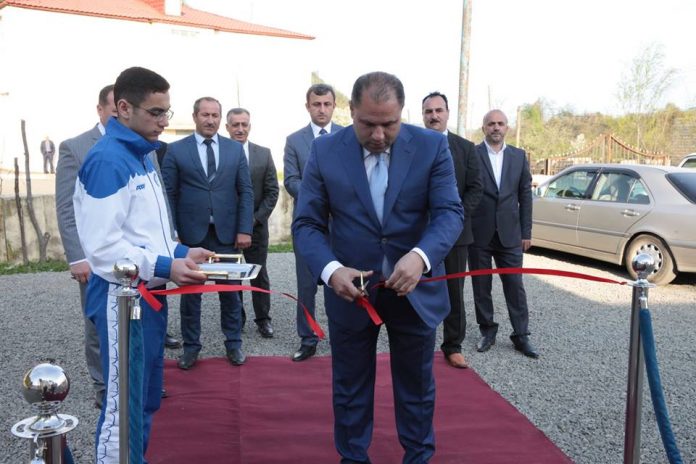 In recent years, Azerbaijan Weightlifting Federation (AZE WF) continues its infrastructure policy at full speed. Especially in the regions, in which the conditions to be created for growing future champions are of great importance, the steps taken in this direction are given more significance. For this purpose, AZE WF and “Zirve” International Sports Club, which opened the weightlifting complexes in Sumgait and Baku on March 5, do not stop the construction of such new places outside the capital. Two more of them were put into operation on April 9-10.

On April 9, the opening ceremony of new weightlifting complex was held in the village of Ashagi Nuvadi, Lankaran region. A modern place was built here in the framework of the massive hall construction project to support the development of sports in the regions. The new hall, which has all the conditions to deal with weightlifting, fitness, powerlifting, and bodybuilding, is selected by its universality. Here, junior and young athletes of the village, as well as, adults have the opportunity to engage in both professional and amateur sports.
Volleyball court was built in the yard of the Complex, which has the most up-to-date equipments, weightlifting platforms, dressing-rooms, shower-rooms, sauna. At the same time, in the complex, about 30 people can engage in sports and exercise in order to remain committed to a healthy lifestyle.
The traditional red ribbon was cut at the opening ceremony of the complex. Sportsmen and public figures of Lankaran region, vice-presidents of AZE WF- Tofig Heydarov and Ruslan Khanverdiyev, General Secretary Rizvan Rasulov, as well as coaches, villagers and other persons got acquainted with the conditions created here. The training process, which guests watched live, was of interest.
Then the official part of the opening took place. First vice-president Tofig Heydarov spoke on the construction of this complex. He stated that weightlifting in Azerbaijan is at a great stage of development, and the sports policy implemented by the country’s leadership plays a major role. Noting the importance of such complexes built in the regions, said that the successes,achieved in the international arena, started from here. He emphasized that the opening of the halls will continue and the infrastructure of the country’s weightlifting will be expanded.
In conclusion, memorial photos were taken.

A day after, a new hall was put into operation in Piran village of Lerik. The representatives of the village and district community, local youth and sports administration, residents, guests of the event, as well as senior officials of AZE WF participated in the opening ceremony. Initially, the red ribbon was cut. Guests got acquainted with the created conditions. They were informed that a large number of sport instruments were set up here to engage in physical training and fitness.
Dressing and shower rooms and special work rooms were also available for utilization. Along with this, a special zone for a football pitch with a capacity of about 100 spectators and for holding weightlifting competitions in outdoor was built in the courtyard. This weightlifting complex is enough to cover the needs of those who want to engage in weightlifting and other sports in more than 10 surrounding villages, not just in Piran. Then the official part of the opening ceremony started. First, Vice-President of AZE WF, Tofig Heydarov, welcomed the participants of the event.
He noted that the next step for the sports development in regions is this complex built in Piran. “In the early 1990s, it was impossible to see such weightlifting centers not only in villages and regions, but even in big city centers. We, as weightlifters, cannot even find the most ordinary hall to train ourselves. Now we build a hall in the village. This is a great source of pride for me. In 1996, National leader Heydar Aliyev said he wanted to see athletes at the peaks, and for this highlighted the importance of paying attention to the construction of the necessary conditions. And now, as a result, we have gathered to the opening ceremony of the complex in Piran village. This village grew Fugan Aliyev, the winner of European championship. This new hall will play a major role in raising a large number of champions. The federation’s recent policy has shown itself clearly. We are sure that the construction of new stationary complexes will give us great success and will contribute to the promotion of Azerbaijan across the world. In formerly times, we have given an importance to the slogan “We must turn Azerbaijan into a sports country”, and now we do not need it. Because Azerbaijan is already a sporting country, and the whole world knows it. To conquer the peaks is left. We will achieve this with the policy pursued by both the federation and the leadership of the country. I congratulate all on the occasion of the opening of our new hall. ”
Then Natig Isakov, the chief of the Youth and Sports Department in Lerik, was given the floor. In his turn, he evaluated the hall as the result of the national sporting policy founded by National leader Heydar Aliyev and pursued by Mr.President Ilham Aliyev. He noted that the majority of such halls will have an important role to both sport and general development in the region. “I thank Azerbaijan Weightlifting Federation for this wonderful, kind and vital work. We are very glad to this day, which is remarkable for both Piran village and Lerik region in general. This place, provided with all the conditions, is irreplaceable in terms of attention and care to sport. I would like to thank everyone who contributed “.
Eventually the artistic part of the event started. The singers performed patriotic and holiday songs.
The requested album cannot be loaded at this time. Error: OAuthException Code: 200, (#200) Missing Permissions

The Plot of AAAF TV on the first competition day