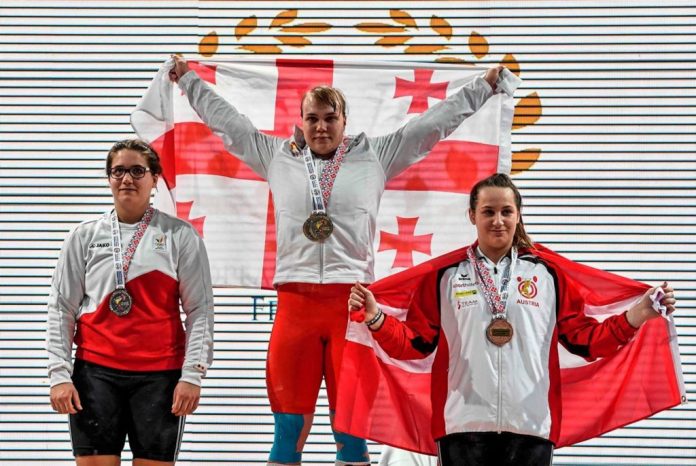 Weighlifting European Championship among men and women was held in Bucharest, Romania, on March 26-April 1. In the competition, 211 athletes (102 women+110 men) from 32 countries competed for medals. Traditionally, members of “Zirve” International Sports Clubs – 3 women athletes got on the platform. The results are gratifying.
Our two representatives competed in 63 kg weight category. “Beer-Sheva-Zirve” athlete-Marina Ohman took 12th place in the overall rankings with a total of 177 kg (82+95) result. In this weight category, 17-year-old Galya Shatova performed more successfully. In the European Championship, ”Smolyan-Zirve” representative was 5th with a total of 199 kg (91+108) result.
Anastasia Hotfrid showed a spectacular result, in 90kg weight category. Ukrainian national athlete, who has repeatedly won the World Championship and Cups, defended the honor of Georgian team and the “Tbilisi-Zirve” club. 22 year old athlete won the European Championship title with a total of 256 kg (124 + 132). She did not leave a reason to doubt to her victory by excelling her competitor with 30kg. Moreover, Nastya renewed the European record of Armenian athlete Ripsime Hurshudian among U-23, with 24 kg result.
We congratulate her, her coaches, Denis Hotfrid and Georgi Asanidze, and wish them success in the upcoming competitions!
Thanks!

Winners in three more bodyweight categories have been known