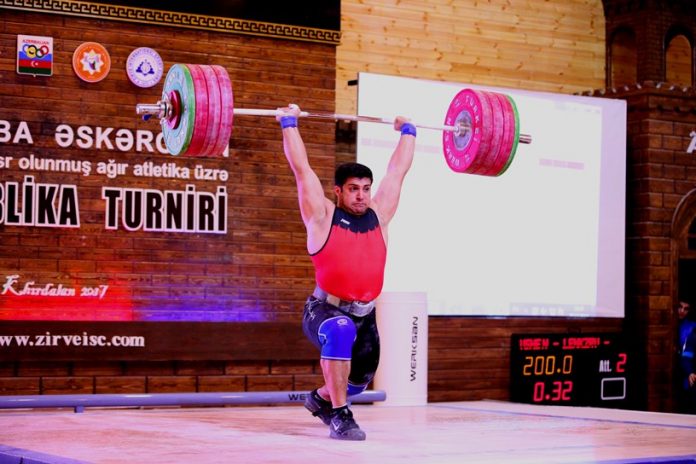 On December 27, Weightlifting Tournament dedicated to Honored coach of Azerbaijan, international referee-Hajibaba Askerov’s memory was held in the competition hall of AAAF Park Residential Complex. In the competition of individual character, men and women weightlifters, as well as masters participated, winners were determined according to the Sinclair schedule. The champions and prize-winners were awarded with medals, diplomas and souvenirs.
First, the opening ceremony was held. Deputy Minister of Youth and Sport of Azerbaijan, vice-president of the Azerbaijan Weightlifting Federation-Ismayil Ismayilov made an introductory speech. After greeting the athletes, family members of the deceased, as well as other guests, he spoke about Hajibaba Askerov’s great role in the development of the country’s weightlifting. He noted that honored coach, international referee’s services are indispensable in our current achievements: “Hajibaba Askerov trained a generation of great weightlifter, coach, referee, specialist, and they continue to work for our sport today. It is our duty to honor his memory, to remember him through such magnificent competitions”. Then, Ismayil Ismayilov informed about the sport achievements of our country in 2017, the local and international competitions, and spoke about the successful sports policy implemented by our state.
Gulara Narimanova, daughter of Hajibaba Askerov, also thanked the organizers of the competition:” Hajibaba Askerov was a lover of weightlifting and devoted his life to the development of this sport. To honor his memory with such a prestigious competition is the result of respect to him and to generally weightlifting. ”
At the end, vice-president of the Azerbaijan Weightlifting Federation, President of “Zirve” International Sports Club -Tofig Heydarov took a floor. After welcoming all he stated that it is pleased to see everyone here: “There is a special state care to sport in Azerbaijan, and the successes achieved as a result of Mr. President Ilham Aliyev’s control to this process are obvious. In 2017, Azerbaijani athletes won 851 medals in international competitions, and it is a pleasure to have weightlifters among them. Weightlifting has about 100 years of history. Hajibaba Askerov is in the considerable part of this history. He was a teacher not only for us but also for our teachers. It is very important to remember him and to honor his memory. In 1990s, the national leader Heydar Aliyev said at a meeting with athletes that none of the people involved in this sport should be left out. The aim of this competition is to protect the weightlifting traditions, to commemorate those who have contributed to our sporting history and to show them respect. We will continue this activity in the following years “.
Special packages were also presented by AZE WF. Hajibaba Askerov’s daughter Gulara Narimanova, injured weightlifter Rustam Imanzadeh, veteran athlete and weightlifting specialists- Vahid Nazarov, Yuri Ryabov, Akif Aliyev and Azad Mustafayev, “Sport Azerbaijan” channel and “AZE WF Media” as well as the head coach of National Weightlifting Masters Team -Oktay Mukhtarov were awarded with this memorable gifts.
Firstly, women got on the platform. Sabina Azimova was gold medalist surpassing all her competitors with a total of 157 kg (66+91) result and 236.45 Sinclair point. Marziyya Maharramova took the second place with a total of 141 kg (63+78) result and 222.76 Sinclair point, the third was Gulchin Alizadeh with a total of 157 kg (71+86) result and 220.97 Sinclair point.
Among men, Rovshan Fatullayev got on the highest place of honorary chair. The bronze medalist of the IV Islamic Games was champion with a total of 360 kg (160+200) result and 399.92 Sinclair point, in this competition. Mahammad Mammadli took the second place with a total of 274 kg (121+153) result and 384.81 Sinclair point, the third was Kenan Aliguliyev with a total of 288 kq (127+161) result and 372.04 Sinclair point.
Finally, masters joined the medal struggle. Zafar Taghiyev won gold medal with a total of 233 kg (103+130) result and 346.98 point. Akif Aliyev took the second place with a total of 150 kg (70+80) result and 339.05 Sinclair point, the third was Natig Hasanov with a total of 255 kg (110+145) result and 335.92 Sinclair point.
Congratulations to all participants and winners and wish them success!
Women