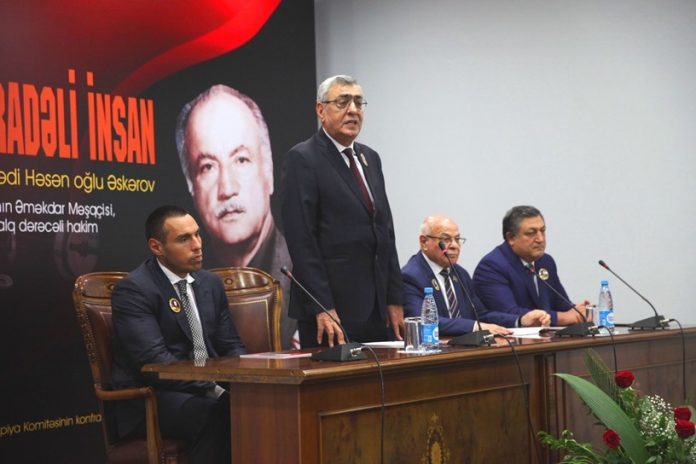 On November 14, the National Olympic Committee (NOC) conference hall hosted the 100th jubilee of one of the most well-known and respected representative of Azerbaijan weightlifting , Honored Coach, international referee, prominent sportsman- Hajibaba Askerov. The event on the “Strong-willed Man” that organized by NOC, and held with the support of Azerbaijan Ministry of Youth and Sports and Azerbaijan Weightlifting Federation, was met with great sympathy.
Vice President of NOC- Chingiz Huseynzade, General Secretary-Agajan Abiev, Deputy General Secretary of the NOC and vice-President of the Azerbaijan Weightlifting Federation-Azer Aliev, Deputy Minister of Youth and Sport, vice President of the AZE WF-Ismayil Ismayilov, vice-president of AZE WF- Ruslan Khanverdiyev, veterans and athletes who are currently pursuing their activities, coaches, referees, other sports community members, family members of the deceased, mass media participated in the event.
The event started with the introductory remarks of Chingiz Huseynzadeh. He noted that the sport was rapidly developing in our country and President Ilham Aliev personally supervised and led the process, as a result of which great success was achieved. Huseynzadeh said that Hajibaba Askerov had a special place in Azerbaijan sport, especially emphasized his services and noted that his memory was always remembered.
Then, Honored Coach, International Weightlifting Referee –Azad Mustafayev took a floor. The speaker spoke extensively about Hajibaba Askerov’s life and activities.
Hajibaba Mashadi Hasan oghlu Askerov was born on September 22, in 1917, in Ganja city. He studied at Ganja’s 7-year school during 1925-32 years. Later he entered to the Baku Oil Technical School and graduated in 1936. In 1936-37, he worked as a drawing and physical education teacher at the Agricultural School of Tartar. In 1937, Askerov’s weightlifting talent appeared in the Azerbaijan State Institute of Physical Culture and Sports. He has been a champion and a record holder of Azerbaijan for many times and has been distinguished by his great ability and talent. He graduated from the institute in 1941 and received a higher education diploma.
It was noticed that from 1947 till the end of his life Askerov worked in various positions and lectured at the Azerbaijan State Institute of Physical Culture and Sports. He is the author of the first textbook on sports in Azerbaijan language (1963). Askerov, who was named the title of “Labor veteran”, was awarded with “For bravery labor” medal and “For excellent achievements” badge for his achievements in the USSR education system.
He was the first referee in the International Weightlifting category, in 1965. His specialists, as Mammad Huseynov, Shua Huseynov, Nazim Orujov, Vadim Marochkin, Yusif Ahmedov, Arif Askerov, Oleg Lugovskoy, Aleksey Kulkov, Yusif Yusifov, Vali Aliev, Ogtay Rzaev, Ismayil Ismayilov have trained athletes in different regions of Azerbaijan.
After the speech, Deputy General Secretary of NOC, vice-President of the AZE WF- Azer Aliev presented the carpet-portrait of Hajibaba Askerov and souvenir presents to Gulara Narimanova, the youngest daughter of the jubilee on behalf of the Federation.
Then other persons made speeches. From veteran weightlifters, referee and coaches- Mamed Useynov, Yuri Ryabovm Namig Najafov, Gubad Jebrayilov, Jebrayil Jebrayilov, and Mirza Huseynov stated that the jubilee dedicated his life to the development of weightlifting, he was the true example of heroism who loved his homeland, people, profession, and Azerbaijan champion and record holder, and the teacher and trainer of all weightlifting experts.
It was suggested to organize an international or national weightlifting tournament to commemorate the memory of prominent sportsman Hajibaba Askerov. Chingiz Huseynzadeh, vice president of the NOC, welcomed the idea and expressed his confidence that it will be implemented in the near future.
All participants of the event were presented a new book titled “Strong-willed Man”, dedicated to the life of Hajibaba Askerov, jointly prepared by NOC, Azerbaijan Ministry of Youth and Sports and AZE WF.
Finally, relatives of Askerov, as well as the son-in-law Akif Narimanov, expressed deep gratitude to the organizers of this event.
The requested album cannot be loaded at this time. Error: OAuthException Code: 200, (#200) Missing Permissions