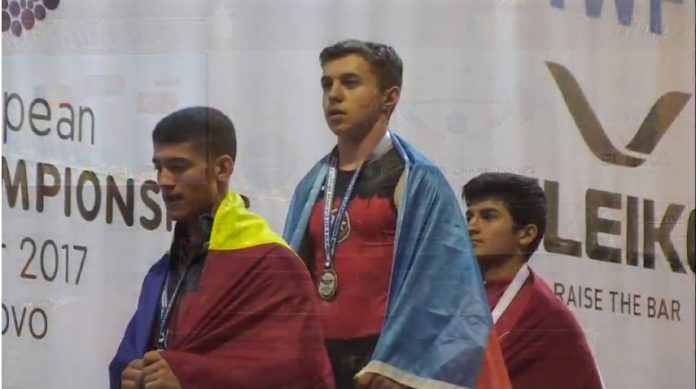 European Weightlifting Championship, among young weightlifters U-15 and U-17, to be held in Prishtina, the capital of Kosovo, on 22-30, has started. 305 athletes (130 girls and 175 boys) from 40 countries will compete in this competition. Azerbaijan National team is also among the participants.
Two of them- Murad Aliev and Rustam Gasimov were already on the platform. Both of them competed in 56 kg weight category, among U-15.
Murad Aliyev failed to complete all three approaches in snatch and ended up with a zero result.
In clean and jerk, he could lift 105 kg and took the 9th place.
Rustam Gasimov successfully completed all three approaches in snatch. Continuously lifting 92, 96 and 100 kg, our athlete was the best of Europe in this movement. Moreover, he managed to renew the European record (99 kg) belonging to Turkish Toptash Caner, lifting 100 kg.
Rustam also made a spectacular performance in clean and jerk. Gasimov proved that he was better than anyone else in Europe, lifting 112, 118 and 121 kg.
Rustam Gasimov was the winner of European Championship among juniors with a total of 221 kg (100+121) result!
Rustam, who competed in European Championship held in Poland, Novy Tomisl, last year and won a bronze medal in 50 kg weight category, set a goal to achieve better results this year. He said he wanted to become European champion in September when he was the winner of Azerbaijan Championship among juniors in February. It is very pleasing that our young athlete fulfilled this desire.
We congratulate everybody who has the smallest contribution in this great victory of Rustam and express our gratitude to them and wish success to our athletes in the upcoming competitions.
Bravo, Rustam!

We have 5 athletes in Rio!