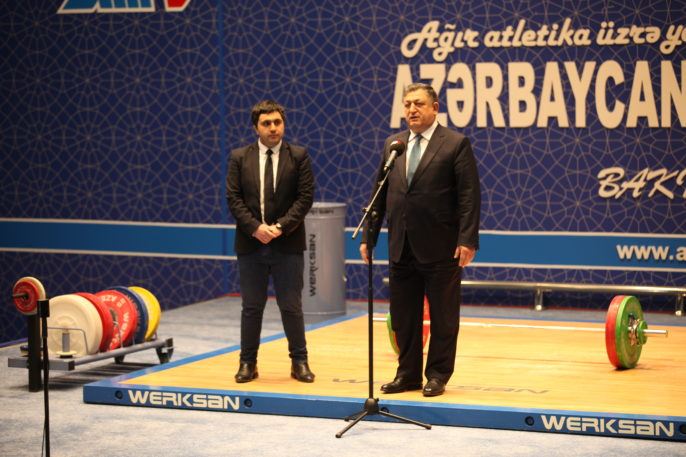 The opening ceremony of Azerbaijan Championship, between boys and girls under 15-17 ( 2000-2001 and 2002-2004 year teenagers) has been held in Weightlifting Academy, village North Dres , on February 16-19. After welcoming the participants and informing them about competition, the performances have started.
Deputy Minister of Youth and Sport, the Vice-President of  Azerbaijan Weightlifting Federation – İsmail Ismailov has made a speech and has reported his views on both organization and future hopes. He expressed his confidence to our weightlifters:  “The essence of sports development in Azerbaijan was founded by National Leader Heydar Aliyev. This is the result of the forward-looking policy of this Genius continuing to this day, that Azerbaijan is the main sports country. We have proved this repeatedly with the competitions, the results, and the high-level organization of these competitions. It is not a coincidence that every year in our country, nearly 50 European and World-wide, and other international competitions are held at the highest level. Everyone sees it. The President of Azerbaijan Republic , President of Azerbaijan National Olympic Committee, Mr. Ilham Aliyev, always made a speech in this regard: either the competition  will be held at the highest level or not. We also accept this request as a slogan, and we carry out further studies.
Azerbaijan Weightlifting  Championship among teenagers is at the highest level in terms of organization. I am sure that we will achieve great successes in this competition, will watch promising athletes and applause their performances. Azerbaijan Weightlifting Federation does their best for the development of this sport. Massivity has been achieved, and results are coming in time. The aim to select the strong athletes, to teach and develop the sport of weightlifting in cities,  towns and villages, to strengthen friendship relations between the athletes and coaches, to increase and improve the athletes’ skill level   and to prepare for the following international competitions. I believe that this traditional championship  will encourage our young and teenager athletes”.
Then Ismail Ismailov has declared the competitions open.
Azerbaijan Republic State Anthem called out. Then the competition continued.
The requested album cannot be loaded at this time. Error: OAuthException Code: 200, (#200) Missing Permissions