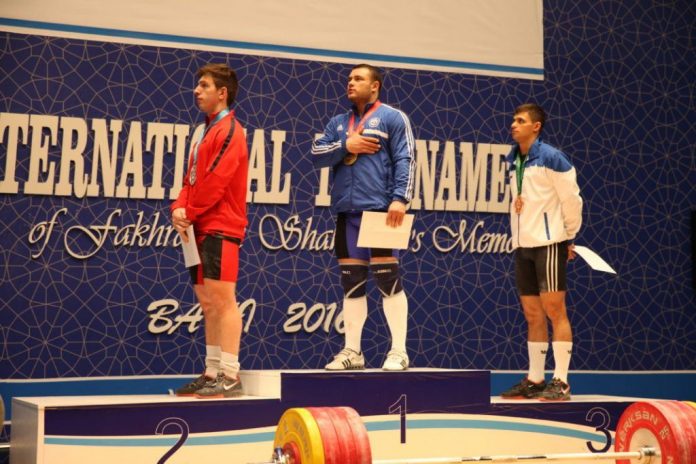 International Weightlifting Tournament dedicated to National Hero Fakhraddin Shahbazov’s memory, which will be held in Weightlifting Academy in North Dres settlement, in December 21-22, has started. The tournament will be the  16th   and will have international status for the second time.
In the second group, over 20 years athletes have competed. Strong weightlifters’ medal struggle has been very exciting. After all, Ukranian athlete-Dmytro Cumak has been gold medalist with total 380kg (170+210) result and 429.34 score. Georgian athlete-Revaz Davitadze has owned silver medal, showing total 333kg (150+183) result and 402.75 score. Moldovan Sergey Chekir has been bronze medalist. Showing total 301kg (135+166) result and 402.69 score, he could get on the 3rd step of the honorary chair.
The  purpose of the competition  is to commemorate martyrs in the  National Hero fakhraddin Shahbazov’s personification , to promote Shahbazov’s lifeline  and his sport activities among athletes and youngsters, to develop and promote  weightlifting, detect  the most powerful athletes, strength the friendly relations, and  increase the skill level of the athletes. General management for preparation, organization and conduct of the competition, is carried out by   Azerbaijan Weightlifting Federation and Baku  Youth and Sports Directorate. The holding of the tournament is assigned  by  an approved division of chief judges.
The athletes of Sports Organizations, that operating in Baku and in other regions, are authorized to participate in tournament. However, the next time,  athletes from vaious foreign countries will be able to take part in this  tournament. In the competition, along with Azerbaijan, the weightlifters from 12  are expected to perform.
Weightlifting Tournament
-will be held among  5 age groups and veterans
– U-17 and over 17 years  women
-U-17-20 and over 20 years  men
The tournament will be held according to the ” organization and conduct rules of competition” of International Weightlifting Federation.
-The competition has an individual nature, winners and awarders in each age group will be determined according to their scores in “Sinclair” table.
– The athletes who have taken the 1st, 2nd and 3rd place in each age group, are awarded with diploms, presents, and medals by Azerbaijan Weightlifting Federation and Baku  Youth and Sports  Directorate.
The requested album cannot be loaded at this time. Error: OAuthException Code: 200, (#200) Missing Permissions

First selective club championship will be held in Ankara!