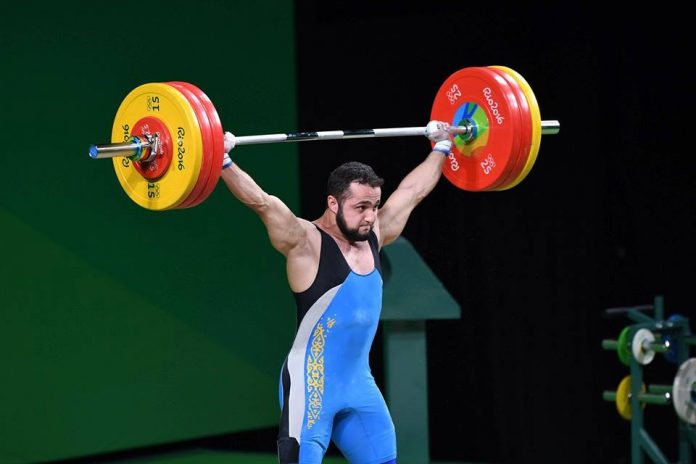 XXXI Summer Olympic Games continues in Rio-De-Janeiro, Brazil. This night the alumni of “Zirve” International Sport Clubs Nijat Rahimov showed his power in a weightlifting competition. He represent Kazakhstan national team in this tournament. He competed in 77 kg weight category and made a fantastic performance. Simply unbelieveable!
Nijat lifted 160 kg in first attempt, then 165 kg in second snatch. He couldn’t lift 168 kg in his 3rd attempt, but could took 3rd place in this movement in Olympic Games.
Rahimov this time had a good lifts in clean and jerk as he always do. Our fellow who lifted 202 kg in his first attempt, guaranted the silver medal both in this movement, and total.
It’s impossible to imagine what happened later. Because of that his main opponent – chinese athlete who lifted 202 kg, Nijat had to lift 214 kg in order to be winner. It was 4 kg more than the world record. He has to lift 4 kg more in order to renew 15 yearly record that was 210 kg by Russian athlete Oleg Perepetchenov in Trenchin city. Azeri sportsman Nijat Rahimov coped with his tuty successfully in his incredible 2nd attempt and become Olympic Champion!
His dance after winning was a great pleasure to watch!
Rahimov was a winner of the Youth Olympic Games, 2010 and senior world champion in Houston, USA, in last December. Although he is far from motherland, he will be our Nijat. It’s the first time the azeri weightlifter took the gold medal in Olympic Games. It’s the great history and Nicat Rahimov wrote that!
“Zirve” International Sport Club congratulate his alumni, his family and trainers and who has work in his won. And thank him for this happiness.
Bravo, Nijat!

National Team sets off to Thailand

Hasanbay Hasanzadeh: “I’m glad that I could triumph”