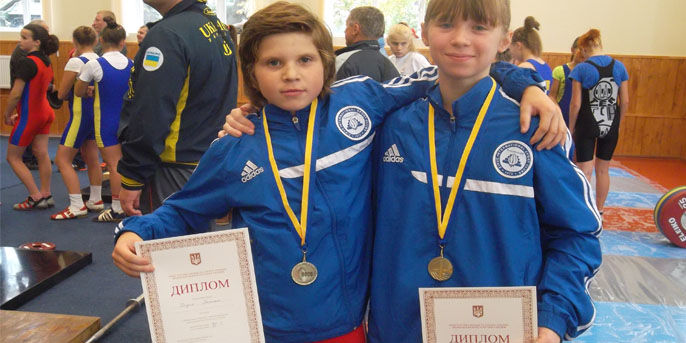 In 17-19th of October Ukraine championship held in Kamenets-Podolski city between U-13 and U-15 youth weightlifters. In competition more than 300 athletes participated in from all the regions. “Jydachiv-Zirve” athletes joined to competition as well. Their performances were so successful.
In U-13 age category Olga Ivienko distinguished. She performed in 40 kg weight category. Olga participated in “9th Zirve Cup” as well and in this championship she has got gold medal. She totally was 96 kg (42+54) result. Olga took first place in snatch and clean and jerk as well. Beside of this, Ivienko updated Ukrainian record in all three motion.
One more participant of “9th Zirve Cup” – Galina Didik competed in U-15 age category, in 40 kg. She won gold medal as well. She has left all the rivals back. Didik totally was 94 kg (41+53). In U-13 boys’ competition Volodimir Kotelchuk has been owned bronze medal. He totally was 91 kg (40+51).
But in U-15 boys’ competition our athlete Maxim Kuzmovich left his all rivals back. He competed in 85 weight category, totally was 230 kg (100+130) result. He was 20 kg more than his closest rival and won gold medal.
So “Jydachiv-Zirve” distinguished by 3 gold and 1 bronze, also by 3 Ukrainian records. We congratulate all the sportsmen and coaches, wish them further success.