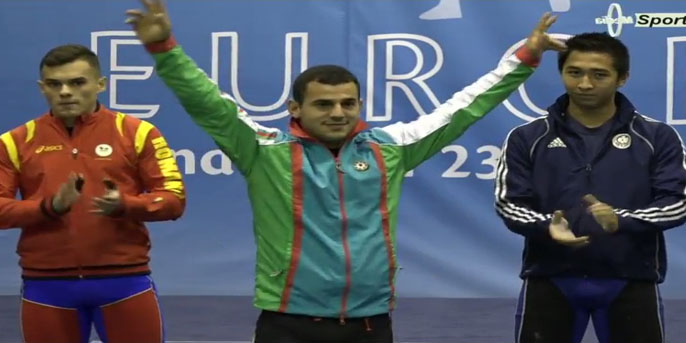 U-20 and U-23 juniors European championship that will be held in 1-11th of october in Litva, Klaipeda has already started. In competition from 40 countries 341 athletes (218 men and 123 women) will be joined to medal competition. Women will compete 7 (48 g, 53 kg, 58 kg, 63 kg, 69 kg, 75 kg, +75 kg), but men will compete in 8 (56 kg, 62 kg, 69 kg, 77 kg, 85 kg, 94 kg, 105 kg, +105 kg) weight category.
In European championship members of Azerbaijan team staff participate in as well. One of them – Firudin Guliyev did up to platform.
Representative of “Goranboy – Zirve” club was 138 kg in snatch, then 142 kg and then he did tame 144 kg. He took 2nd place in snatch in European championship.
But in clean and jerk everything was better. In first attempt our sportsmen ordered 184 kg and he was successful. That was European record between U-23 juniors. Till Guliyev owner of this record did belong to Romanian athlete Razvan Martin – 181 kg. Firudin was 3kg more.
In his second attempt he couldn’t lift 190 kg and he rejected his third attempt. 184 kg was satisfy for gold medal.
Firudin’s results gave big hopes for future competitions. By 328 kg (144 + 184) result Firudin did up to highest level of honorary chair. Beside of this result Firudin is European champion and recordsman between youth and juniors, winner of Khazan Universiade, bronze medalist of Seniors World Championship, repeatedly Azerbaijan champion, winner of “Zirve” International Sport Club Cup and Final championships as well.
We congratulate our athlete and wish him great victories, successes in future competitions!
Good job Firudin! “Zirve” athlete did up to honorary chair and took Azerbaijan to...