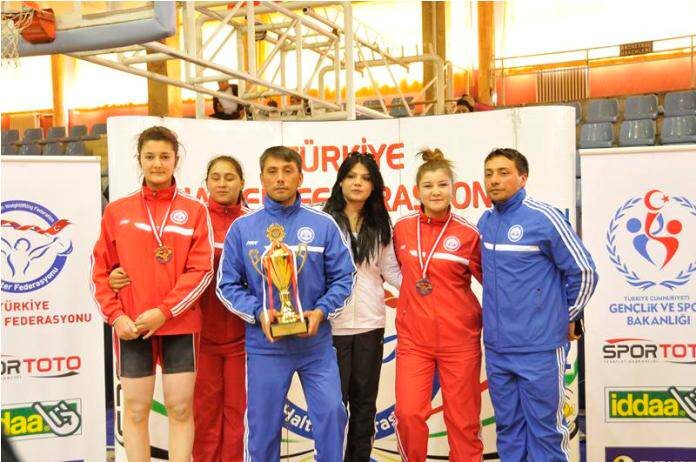 Successes of “Zirve” International Sport Club are nonstop. One more good news came from Turkey.
Member of family of “Zirve International Sport clubs” – “Ankara Tuzgolu – Zirve” Sport Club competed very well in Turkey clubs championship and became a champion. Competition held in 23-26th of april, in “100th year” sport salon, in Konya city. From 32 regions of brother country, from 64 clubs, 326 men and 136 women, totally 462 athletes participated in competition. That was record indicator.
Competition of women was so intensive and “Ankara Tuzgolu – Zirve” club became a champion with 165 points. This team directed by Emrah and Yasin Arslan brothers and they have got 4 more points than the closest rival.
7 young athletes did up to platform, 3 of them demonstrated so effective performance. Two of them in 53 kg Gamze Yayla was 156 kg (72 + 84) and in 75 kg weight category Zeynep Atakan was 196 kg (85 + 111) result and won gold medals. But Bushra Dalmizrak was 163 kg (78+85) result and took 2nd place.
But need to note labour of other members as well. Gizem Nur Demir, Elif Unal, Emine Saritoprak and Gulsum Yavuz demonstrated different results and helped “Ankara Tuzgolu – Zirve” club as well. Girls performed perfectly, became a champion of Turkey and wrote their names in history. This victory is the big triumph of “Zirve” Sport Club.
We congratulate to everybody regarding to this perfect victory. We are sure that it will continuous!.

Dadash Dadshbayli left all the rivals back in “Titans’ competition”!