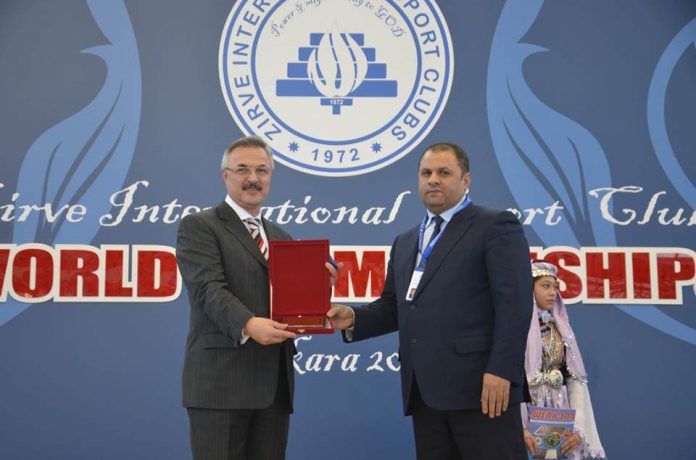 One of the leader clubs of Azerbaijan – the international project of “Zirve” Sport Club – within the “Zirve International Sport Clubs” 1st World Championship final stage has started. Today, in 24th of december there was great opening ceremony in “Altinpark-Akarsu” Sport Complex which is situated in Ankara and belongs to our club.
Opening ceremony has been started by bringing of club logos and country flags. These logos and flags has been brought to salon by club trainers and sportsmen.
Then speeches held. First president of Turkish Weightlifting Federation – Tamer Tashpinar has been invited to chair to speak. He told these words:
“Hello to everybody, welcome to the great tournament. “Zirve” Sport Club has done matchless works for improving of Azerbaijan,Turkish and also World Weighlifting. I thank to all representatives of this club who spent effort and labor for sport.Especially I appreciate it to president of club Tofig Heydarov. You know that sport is work of heart. If you don’t love it, you can not be a successfull.In here,in this competition that is held in “Altinpark-Akarsu” Sport Complex, we can see the great sport love of these people. Not in only his country Azerbaijan, also in Turkey and in Europe and in other contitents, support and improving of weightlifting idea is very nice. I willing these labors will bring success and it would be trace for world sport. Again I thank to everybody, I wish success to “Zirve” Sport Club and its international project – “Zirve International Sport Clubs”.
Then president of “Zirve ISC” Tofig Heydarov did speech. He also did greet everybody and continued his speech like this:
“I appreciate all of you. Till yesterday our club being held competitions only in Azerbaijan. But today we assembled in outside of our country for first international competition of “Zirve”. About choice of place we have not thought too long. Our brother country Turkey, in beginning of 90th years opened its arms for many of our athletes, helped them for their successes. Our first weightlifting world champion Hafiz Suleymanov performed under Turkish flag as well. Turkish Weightlifting Federation woke sport of country up with its last works. We applaud them for these steps and support them as well. Federation helped us very much and I appreciate them for this. You could see the improving of sport in Azerbaijan. 2015 1st Europe Games will be held in Baku and this is proof of develop. As a result of personal care and attention of the president of Azerbaijan Republic, president of Olympia Committee Ilham Aliyev, our country sport conquer tops and will keep on like this. By the way, today our president’s birthday, I wish him health, I appreciate him for his activity, his care and support of sport and care of Azerbaijan.
Again I greet guests and wish you interesting watches. Thank you!
After speech, presentation ceremony held. President of club Tofig Heydarov presented appreciation package to the president of Turkish Weightlifting Federation – Tamer Tashpinar, triple Olympic Champion, closer friend of “Zirve” – Halil Mutlu, owner of “Altinpark” and directory of ANFA group of companies, also representative of Ankara Big City Municipality. Beside of this, Heydarov presented memorial medals to president of Turkish Judo Federation – Fatih Uysal, representative of Union of Azerbaijan Businessmen – Ilham Abbasov, representative of Azerbaijan Ambassador in Turkey – Faig Baghirov, also sponsores of competition Ali Javadov and Vugar Habibov, young successful weightlifter of Azerbaijan – Rustam Imanzade’s trainer – Anar Gasimov.
Also all the names noted above have been got “Gold Card” for use in AAAF Park Residential Complex. This event happened first time in history of this complex and this is index of value of these people.
Then president of Turkish Weightlifting Federation Tamer Tashpinar presented appreciation package to president of club Tofig Heydarov and head trainer of “Zirve” Sport Club, Europe and World champion – Hafiz Suleymanov.
One more great gift has been given to Halil Mutlu. Regarding to President of Azerbaijan Republic Ilham Aliyev’s birthday, club president Tofig Heydarov presented keys of three room apartment in AAAF Park Residential Complex to triple Olympic champion, many times world and Europe champion and recordsman Halil Mutlu.
At the end artistic part started. Historical “Stablemen team” of Turkey performed in stage and have been got great applauds.
The requested album cannot be loaded at this time. Error: OAuthException Code: 200, (#200) Missing Permissions

In first age group competitions of our World Championship have started!...